This is like a clip from the most boring sitcom ever made. There's no banter over getting the DNA testing, no mini-jokes about what kind of genetic sample was used, not even a Homestar Runner reference!

Not gonna lie, after looking that link up I watched an hour of Homestar Runner stuff. Man, that is top quality internet right there. Coming back to XKCD is like following up a delicious coq au vin with some snot on a paper plate.

This whole comic is just a bunch of set ups to jokes that don't happen. It could almost be funny, if it was intentional anti-humor. As it is, we have "I should probably start avoiding chocolate" as a punchline. Not even "Well, it explains my chocolate allergy". Instead he's tacitly admitting that he's had chocolate before without bad side effects.

Other missed opportunity: Having the percentages in panel three not add up to one hundred. It'd be a little mini gag that some people would miss, making it all the more special to those who spotted it. It'd even go with the theme that ancestry tester places are bullshit. 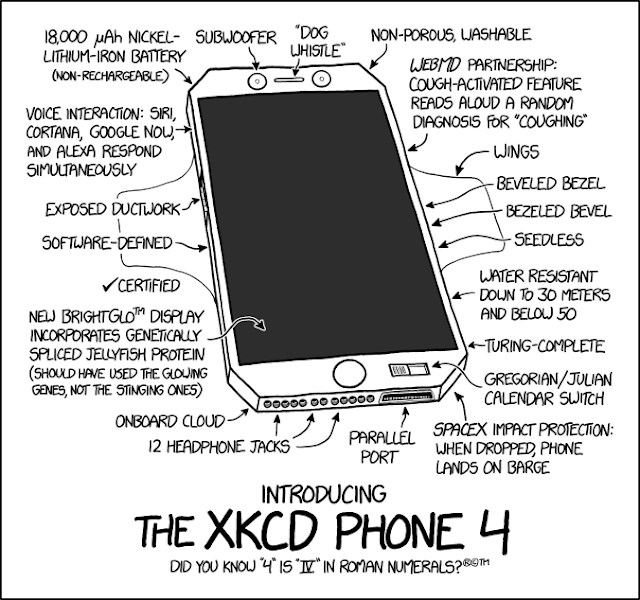 Oh god he's going to keep making these. He's like Wall-E, keeping on with his useless and unrewarding task because no one is telling him to stop. I haven't seen Wall-E since it came out, does it still hold up?

So, let's pretend it was funny the first time he did this. It wasn't, but let's pretend. He's making fun of how smartphones have useless features and they're poorly made and stuff, okay that's fine. I don't see why Randal Munroe has to tell us this while Maddox is still alive, but to hell with it. Why then, do we need the same joke repeated three more times?
Posted by GG at 10:34 PM

Add comment
Load more...
Newer Post Older Post Home
Subscribe to: Post Comments (Atom)
New readers: Please note that I started this blog when I was 15, and many of my early posts reflect that. I'm keeping them up because people seem to like them, but know that anything written before 2016ish is not something I'd necessarily stand by today.